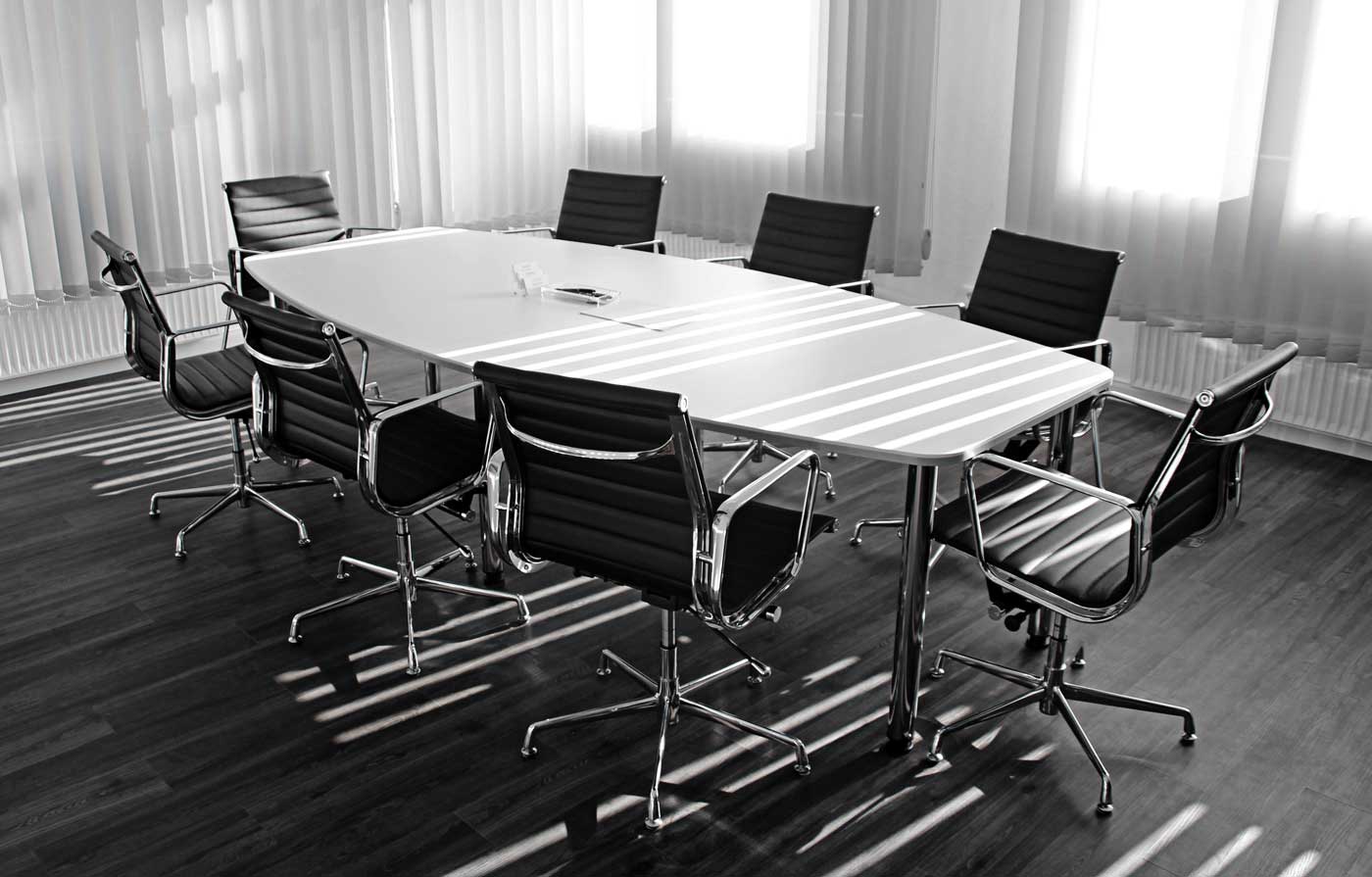 HOW ARE LEADERS HELD ACCOUNTABLE?

Unless a church leader is accountable, and unless that accountability group has the power and authority to tell him “no,” then for God’s people to support his ministry is extremely questionable. For this reason, many churches have set up leadership structures (typically in the form of a governance board) with members who are independent from senior leadership and who can speak truth to power. The Network has failed to operate with accountability for its senior leader, Steve Morgan. He is accountable to no one.

Steve has appointing and dismissing power over the men he has groomed to be members of his board and, as a result, has created a structure where speaking truth to power is a conflict of interest for The Network’s board members. This article will outline what healthy accountability looks like, and how The Network's structure does not hold up to scrutiny.

So he said to them, “Why do you do such things? I hear from all the people about these wicked deeds of yours. No, my sons; the report I hear spreading among the LORD ’s people is not good.

Tragically, in recent years, Christians have gotten used to revelations of abuses of many kinds throughout the church—from Willow Creek to Harvest, from Southern Baptist pastors to Mars Hill. We find in these examples that abusive leaders often operate by surrounding themselves with people who are not able or willing to hold the leader accountable. In most cases they operated as "Yes Men" to the leader, giving approval and validating everything he did.

Healthy churches often  appoint a board which is independent from the main leader to act as a check against his or her power. Board members are either voted in through a transparent process, or are appointed in a way to avoid conflicts of interest or involvement from the senior leadership of the organization.

Wayne Grudem, Research Professor of Theology and Biblical Studies at Phoenix Seminary, outlines many forms of church government in chapter 47 of his book Systematic Theology. In all types of church government Grudem outlines (from corporate to congregational, from Presbyterian to Episcopal) the ultimate decision of who leads the church rests on its members. This doesn't mean the church has to be a pure democracy, but it does mean the members are the ones who appoint, to various degrees, an independent governing body to which the leadership of the church is accountable.

HOW ARE CHURCH BOARDS TYPICALLY STRUCTURED?

Below is a diagram of a commonly-held system of church government where an independent board, either elected or appointed by the members of the church, has oversight of the church's leadership. This diagram would represent the common "Corporate Board" model. [2] 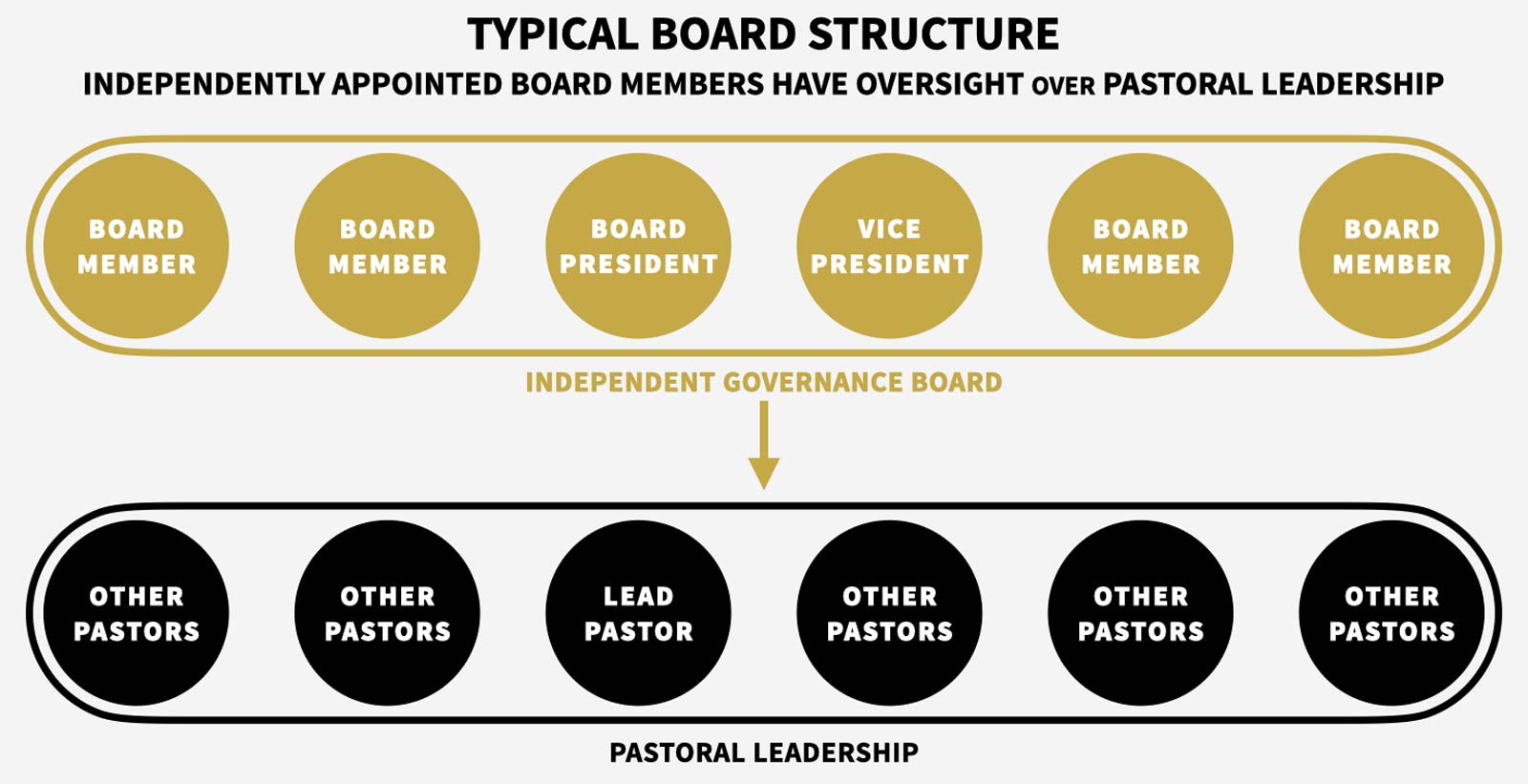 In the above diagram the board does not answer to the Lead Pastor because they are not appointed by him, nor are they fireable by him. They operate with autonomy and keep the pastoral team accountable to the congregation (the members of the church). These checks and balances are essential for proper transparency within the power structure of a church.

HOW IS THE NETWORK STRUCTURED?

Ironically, despite its strong affinity for Systematic Theology, The Network diverges sharply from Wayne Grudem's call for "accountability to the congregation." Steve, as the Network Leader, appoints his own governing body who are accountable solely to him. 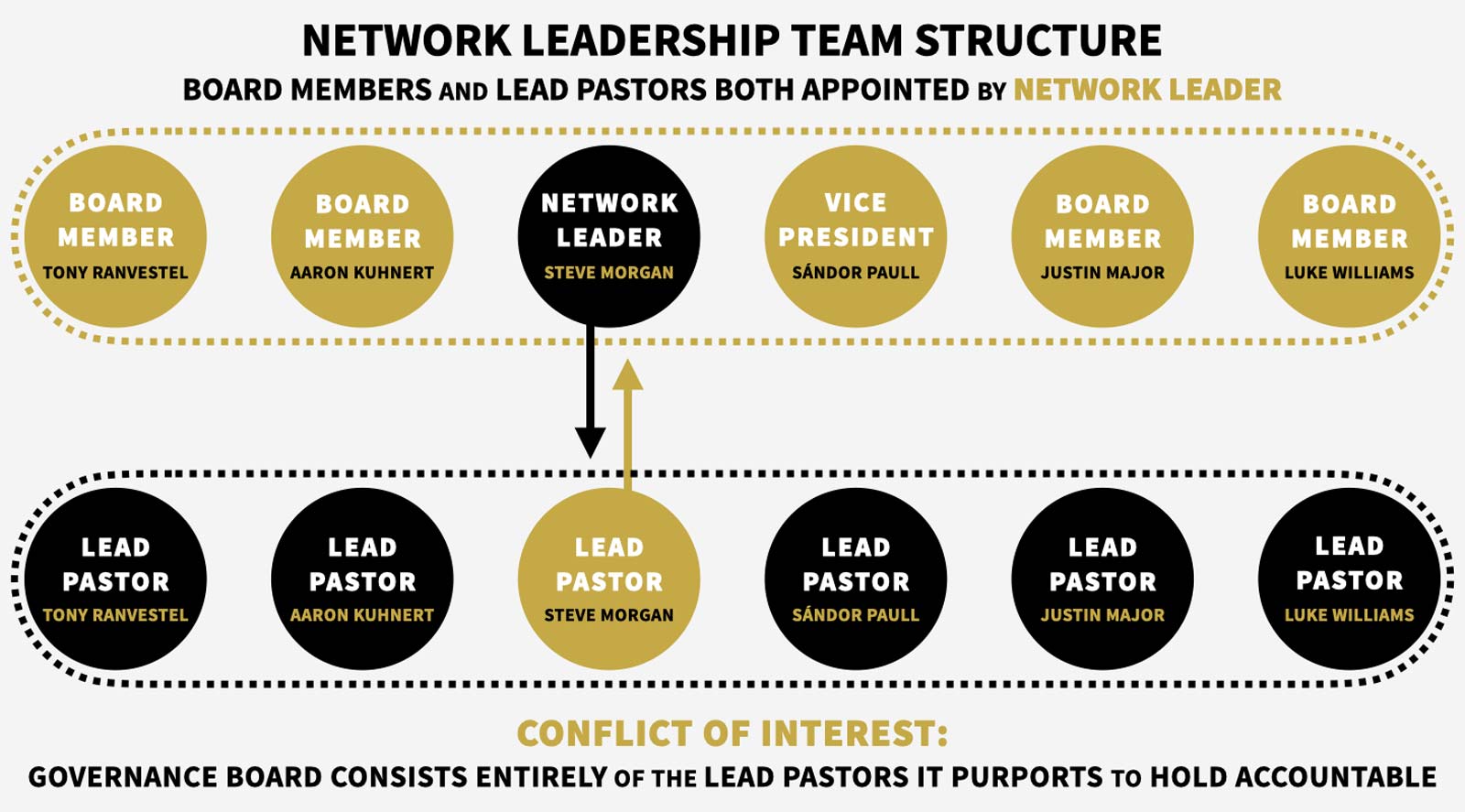 In other words, the team who is responsible for the discipline of local Lead Pastors consists of the same lead pastors it purports to discipline. It is a clear conflict of interest for Steve Morgan and the lead pastors on the Network Leadership team to have the responsibility of being on their own oversight board. This process destroys the independence of the board, meaning its leaders are accountable in appearances only. By its very design, the board cannot hold the leadership of the Network accountable.

WHO IS THE NETWORK LEADERSHIP TEAM?

Members of The Network Leadership Team are not posted anywhere on any of The Network's local church sites. The following men were all members of the Network Leadership Team when the bylaws were revised in 2018 which gave them hiring and firing power over the pastors of the churches as well as the authority to revise local church bylaws. According to several corroborating sources these men are still all on the board as of 2021.

HOW DOES LEADERSHIP WITHIN THE NETWORK WORK IN PRACTICE?

In practice, all Network lead pastors and church planters are chosen by Steve Morgan. Lead pastors identify potential pastors from within their local church, typically young men in their twenties[5], and the lead pastors introduce these candidates (who do not know they are candidates) to Steve. These men "must be homegrown"[6] meaning they should not be influenced by external churches or systems. Preferably, they should have been converted within The Network.

After this introduction, if Steve approves, the candidate will be brought on staff to be groomed for future positions within The Network. Because Steve is the Network Leader (president) of the Network Leadership Team, he can dismiss any pastor in any church at any time (with the support of his subordinates on the Network Leadership Team). These pastors, the vast majority of whom have not earned seminary degrees (in fact most are recent converts) become part of the leader pipeline Steve maintains to further his top-down, hierarchical organization.

Below is a diagram demonstrating how the choosing of lead pastors and church planters happens in practice, with the Lead Pastor of the local church not able to promote anyone to become a pastor without Steve's direct consideration. The Network Leader promotes church planters and lead pastors. 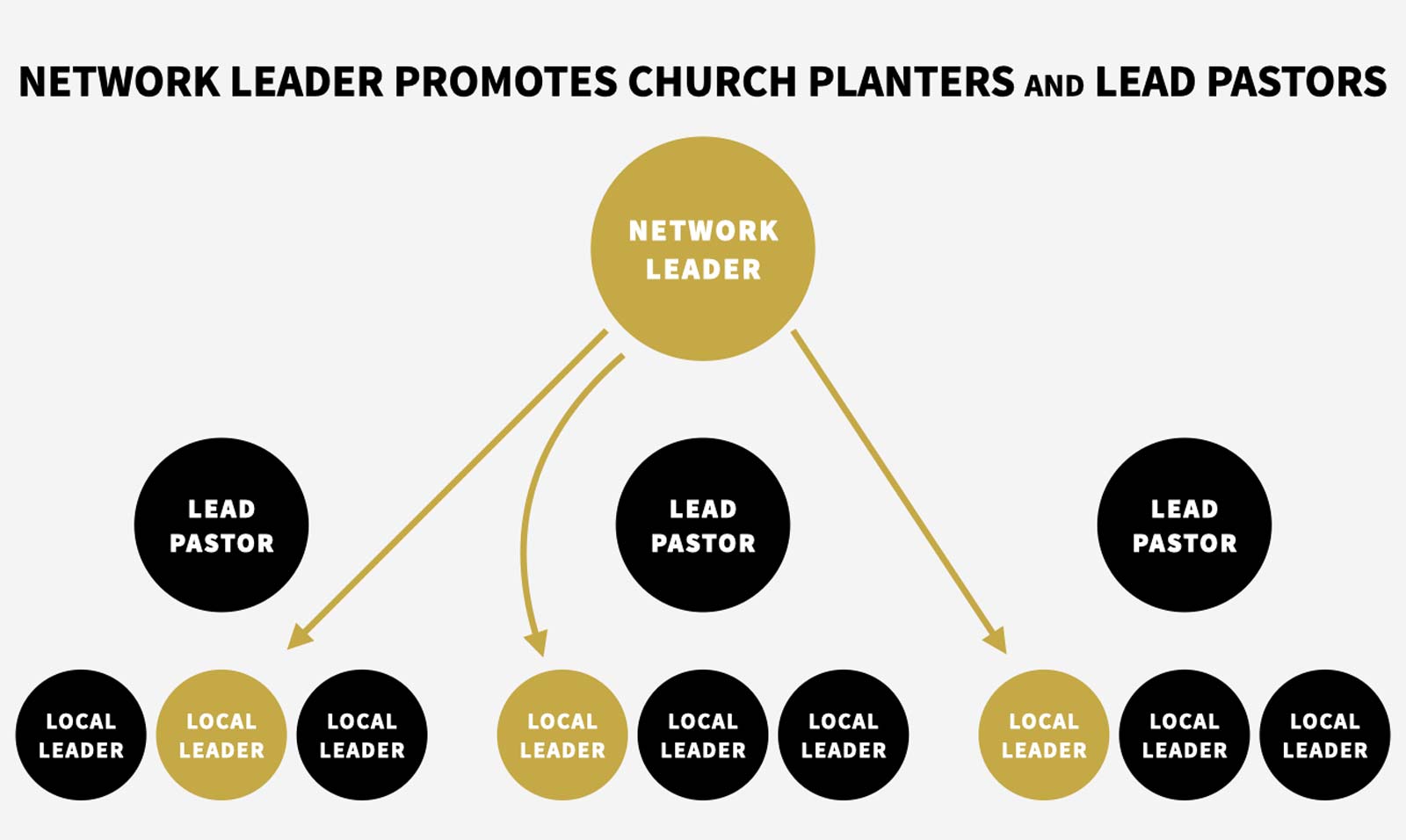 By choosing all the leaders within The Network, Steve insulates himself from criticism and reasonable dissent. In addition, should any church within The Network decide to create a unique governing structure which could reasonably add transparency and accountability to the system, "the Network Leadership Team has authority to amend the Team’s Operating Bylaws, the Bylaws used by the local churches, Articles of Incorporation, and any policy of the network as needed".[7]

This hierarchical leadership structure has the practical effect of creating exactly the lack of accountability which Wayne Grudem warns against. Steve grooms young men to submit to his leadership until he trusts them enough to place them on his own oversight board. He silences dissent by keeping all pastors in The Network under the constant threat of being removed from office if they disagree. Should any pastor feel compelled to take the side of one of their fellow pastors and stand up to Steve, this pastor would also face the possibility of being "disciplined" by Steve and losing their position.

"The Network Leadership Team has authority to amend the Team’s Operating Bylaws, the Bylaws used by the local churches, Articles of Incorporation, and any policy of the network as needed."

Leaders within The Network will object that this system has checks and balances because the local churches maintain their own boards which include members who are unpaid. However, these church boards suffer from the same inherent problems in structure and governance as The Network Leadership Team.

Local church board members are hand-selected by the lead pastor of the church and approved by Steve Morgan which creates conflicts of interest for all parties. Lead pastors will not appoint anyone to their board who would defy their authority. Board members cannot impartially speak truth or confront abuse because the person they are holding accountable is the same person who appointed them. The lead pastor could fire them if they are a staff member or ostracize them from community if they are an unpaid church member. Even if the board did decide to hold their ground, the Network Leadership Team could revise the church’s local by-laws and curtail their limited authority.

The diagram below demonstrates Steve's power within The Network. Keep in mind that the men who serve him on the Network Leadership Team are also lead pastors themselves. You can see from the diagram the threat these men would face if they fell out of his favor. Lead Pastors can be removed at the discretion of the Network Leadership Team. It is unreasonable to believe such a system could produce an independent board who could discipline Steve or hold him accountable. 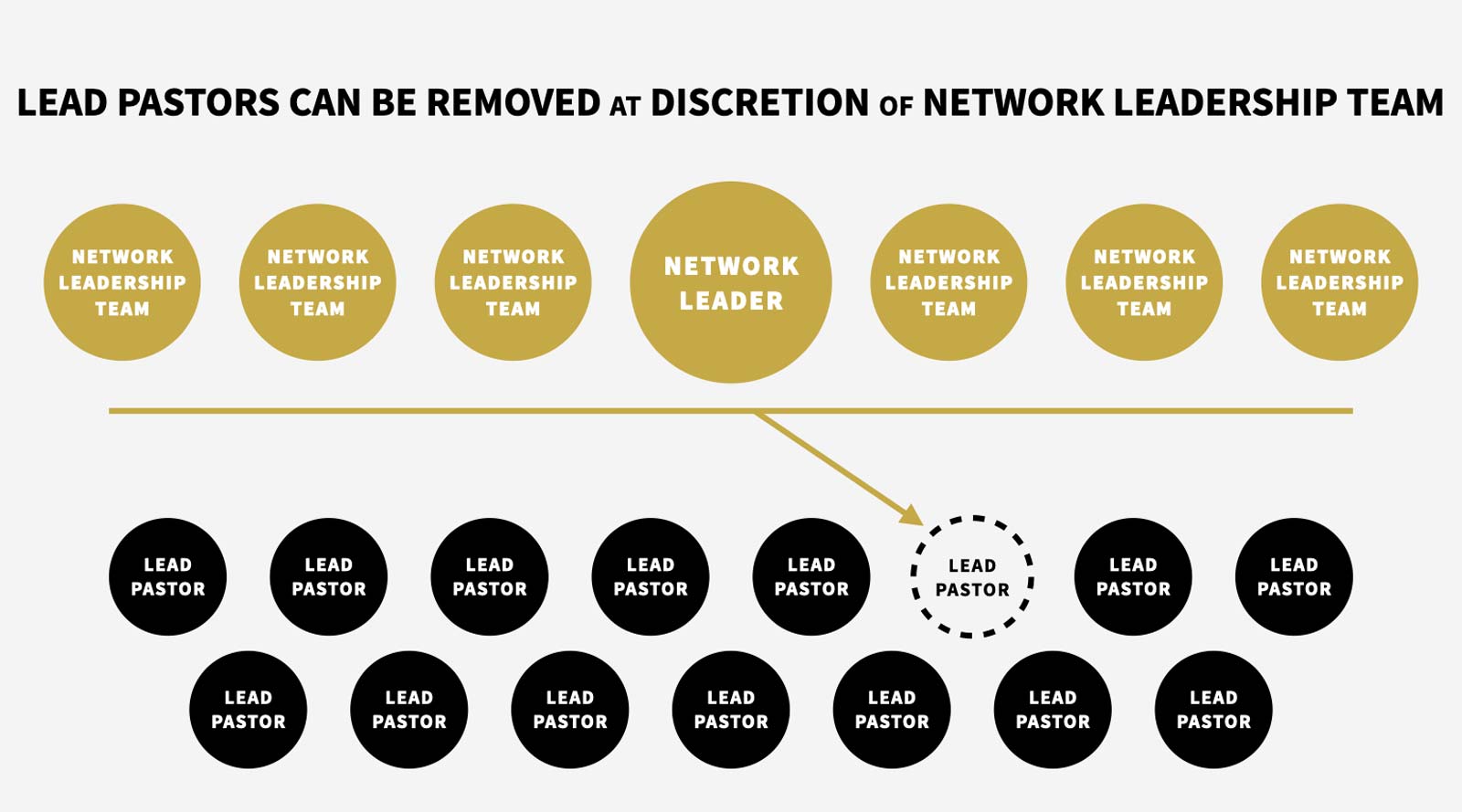 It's worth pointing out that even if a pastor within The Network could see Steve's abuse of power clearly after years of grooming, losing a position within the Network is not simply losing a job. Because The Network shows the 8 signs of a dysfunctional organization, leaving The Network would mean losing everything. The pastor would lose their vocation, their social structure, their very purpose in life, along with all the supernatural prophetic messages Steve has spoken over them through the years.

IS ACCOUNTABILITY PRACTICED WITHIN THE NETWORK?

“You know that the rulers in this world lord it over their people, and officials flaunt their authority over those under them. But among you it will be different... For even the Son of Man came not to be served but to serve others and to give his life as a ransom for many.”

No, for all the reasons stated above, the Network Leadership team does not hold the leader of The Network accountable. Steve Morgan, President of the board and Network Leader, as well as Lead Pastor of Joshua Church, has surrounded himself with people who must submit to his leadership or face the consequences. His oversight board is appointed by himself and he allows no external influence to interfere with his control. He appoints only those he has groomed to obey him through years of careful planning. He holds sway through spiritual abuse, charismatic manipulation, and the threat of others' losing their vocational stability. The cost is simply too great for anyone to bring meaningful checks and balances to his authority.

HOW DO I KNOW THIS ARTICLE IS TRUE?

As a member of a church in The Network, and especially if you donate money to the organization, you are entitled to see the bylaws which govern it. Ask a pastor for a copy of your local church's bylaws as well as The Network Leadership Team bylaws. These will be two separate documents, and will likely reference each other since the Network Leadership Team bylaws allow the Network board to modify your local bylaws at any time. The above was accurate as of the 2018 bylaws which were still in effect as of 2021.

If there have been any substantive revisions to any documents which address the issues brought up in this article, any member of The Network Leadership Team is invited to provide a new copy so we can update this page. You can contact us at [email protected].

In addition, we have obtained a recording of an overseer training where Steve Morgan discusses the principles in this article. In this training Steve redefines "accountability", asserting that overseers should create an environment of "protection and safety" for the lead pastor and insulate him from the members of the church.

LISTEN TO AUDIO ON OUR PRIMARY SOURCES PAGE →

8 SIGNS OF A DYSFUNCTIONAL CHURCH: Characteristics of spiritual abuse within dysfunctional churches and high-control groups