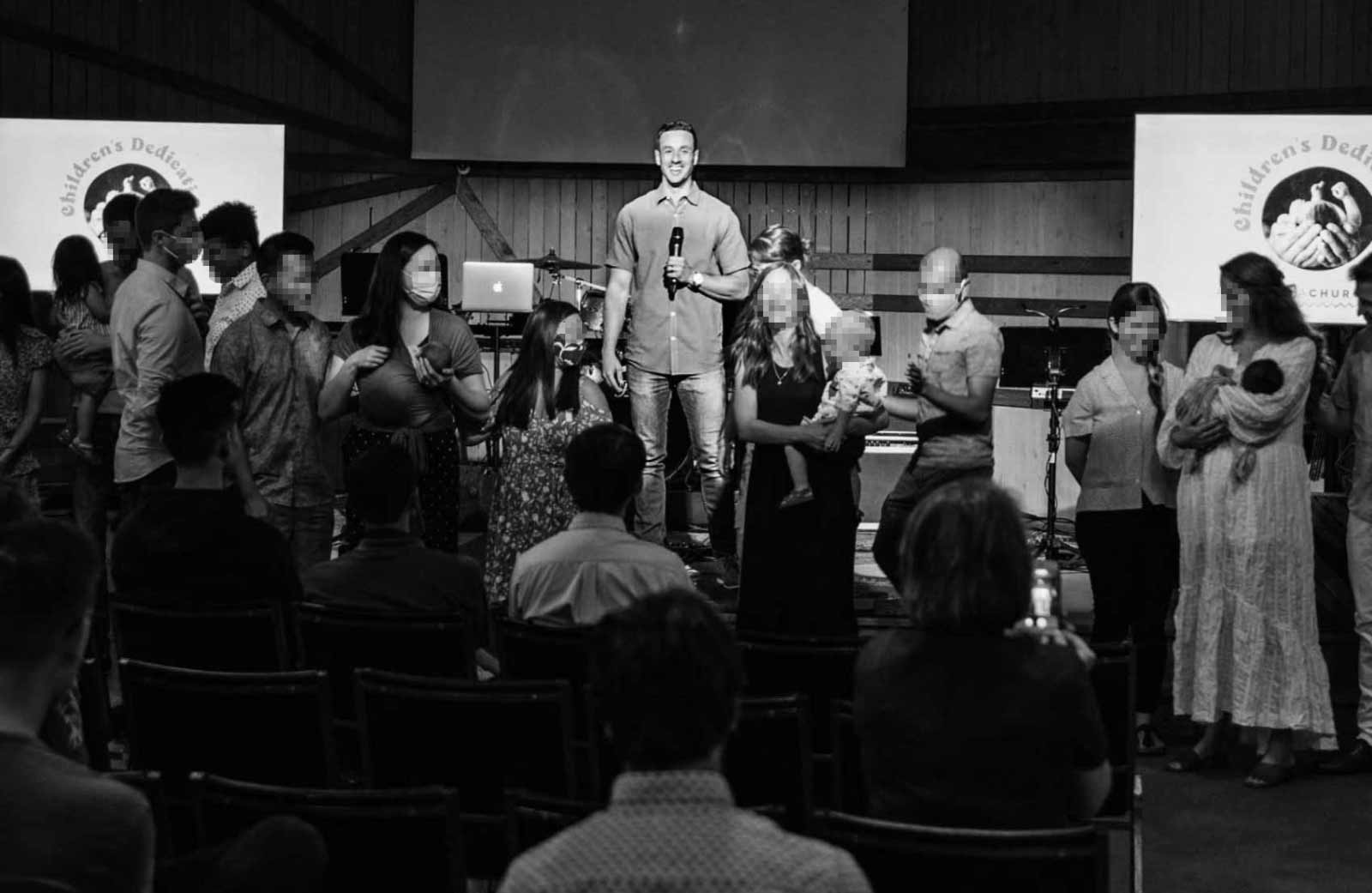 For an in-depth analysis and specific examples of how Vista Church encouraged leaders and members to flood review sites with positive reviews, read this article on NotOvercome.org.

WHO WAS THE LEAD PASTOR OF VISTA CHURCH WHEN THESE REVIEWS WERE WRITTEN? 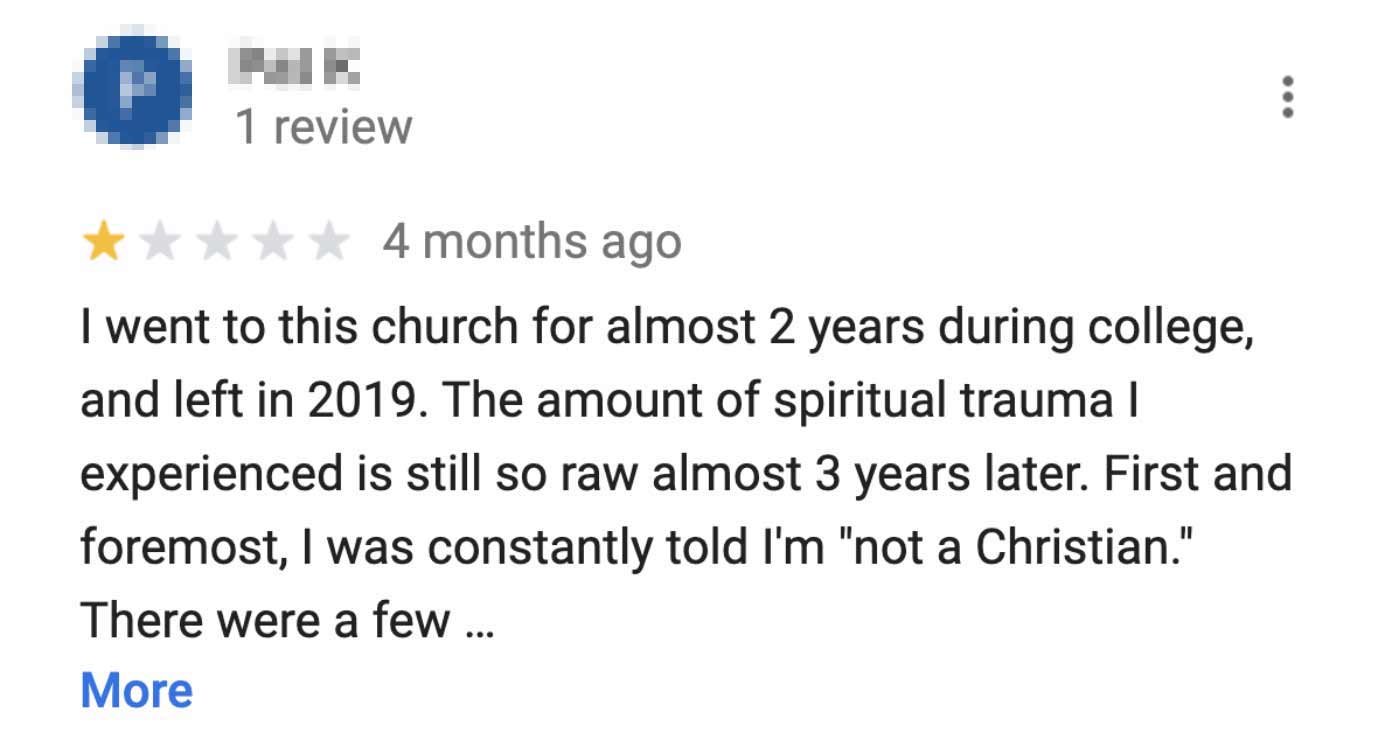 I went to this church for almost 2 years during college, and left in 2019. The amount of spiritual trauma I experienced is still so raw almost 3 years later.

First and foremost, I was constantly told I'm "not a Christian." There were a few reasons they used. One was that I wasn't having a "physical experience" during worship, as I was told "worship is a physical experience" and that if you're not feeling chills run through your body, you're not worshipping. Another reason they used was that I was struggling to read my Bible and "if you were really a Christian, reading your Bible wouldn't be a struggle for you" (yes this is a direct quote that I remember very clearly).

Additionally, I wasn't tithing the $500/month that my parents were giving me for rent. Apparently a broke college student not giving them his rent money was grounds for being rebuked. There were so many other things like being told to stop hanging out with non-Christians, and that the anxiety and depression I was struggling with was due to a lack of faith (a leader actually took me to lunch to tell me this). I was also rebuked for giving some money to a charity I care about instead of giving that money to Vista.

The nail in the coffin was when my now wife and I didn't show up to church or small group for a few weeks. Instead of reaching out to us, we were simply removed from all group chats and Facebook pages, and people who had been pouring into us never talked to us again. All of this was so incredibly painful. I pray earnestly everyday that the leaders of this church will humble themselves and repent for the harm they've caused so many of us. Until then, I'll keep this review up.

SO LONG AS YOU CONTINUE TO SACRIFICE YOUR TIME, MONEY, WILL, AND OPINIONS, YOU'LL BE ACCEPTED 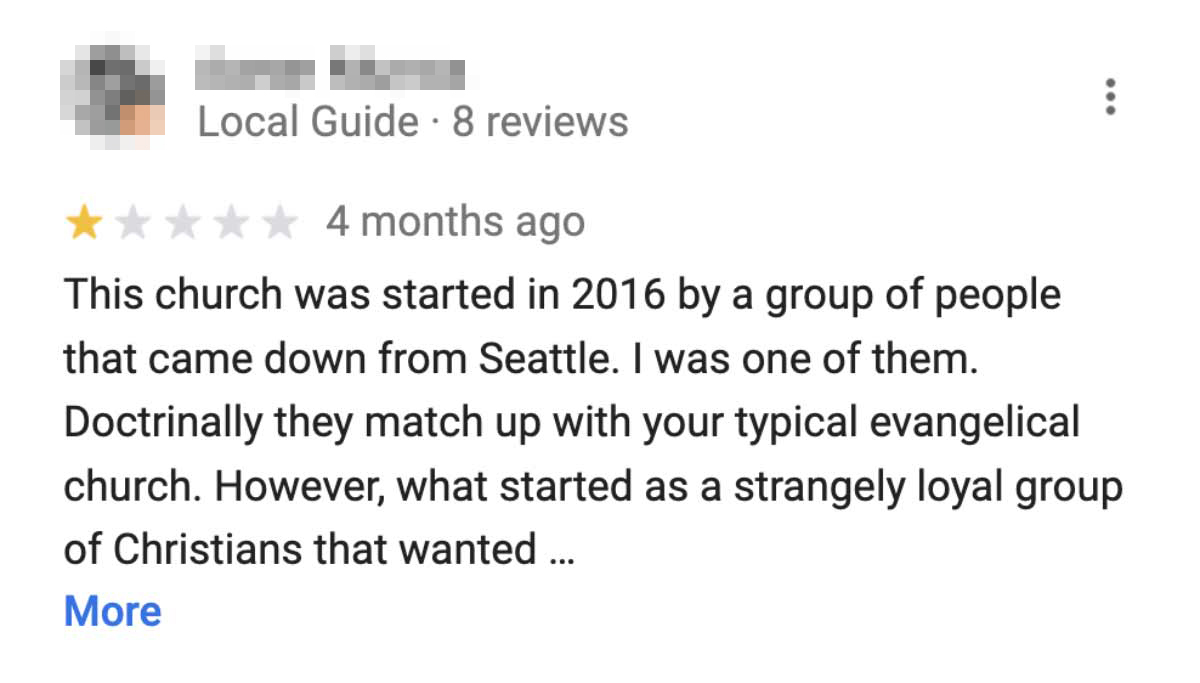 This church was started in 2016 by a group of people that came down from Seattle. I was one of them. Doctrinally they match up with your typical evangelical church. However, what started as a strangely loyal group of Christians that wanted to reach the community (again, I was one of them) has become, in my opinion, very insular. To newcomers, the church may seem friendly, but as a former member, I can attest that church members are instructed to focus intently on visitors and quickly push them towards small groups, serving, and membership.

From what I’ve seen, so long as you continue to sacrifice your time, money, will, and opinions, you’ll be accepted. If you’re there for even a small length of time, you will hear the phrase “trust to your leaders” often stressed and verses on submitting frequently quoted and taught. I believe this is done to manipulate people into ignoring their sense that something’s not right. I don’t consider this is a safe church.

The full story of how and why I personally left can be found at “leavingthenetwork.org” under stories. On this website there are also details that aren’t available even to members about the network of churches that Vista is a part of.

AT FIRST THIS CHURCH IS VERY FRIENDLY, BUT ONCE I WAS A PART OF IT IT GOT... ODD 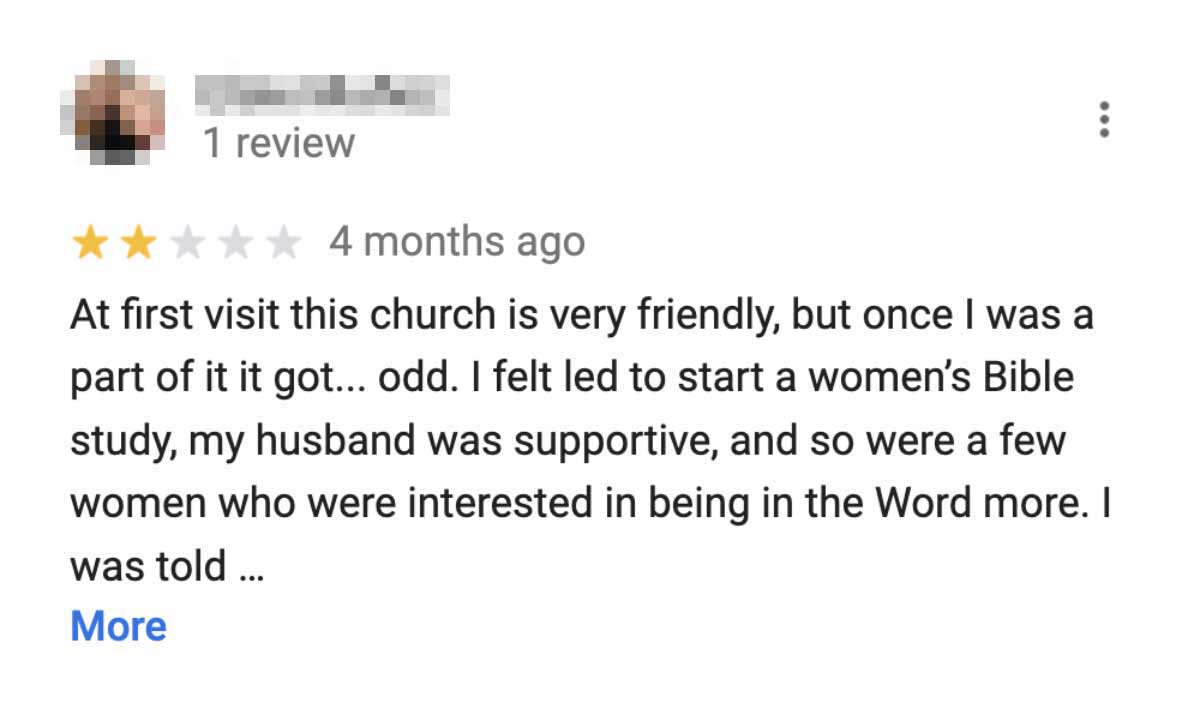 At first visit this church is very friendly, but once I was a part of it it got... odd. I felt led to start a women’s Bible study, my husband was supportive, and so were a few women who were interested in being in the Word more. I was told that I could “get together with my friends to read the Bible” but I “can not start a Bible study.” The staff also made it clear that they would provide no support for this, or help for me. In fact, the pastor even told my husband that I needed to “check my pride.” I found it very hurtful and confusing. Women were hungry for community and the word of God. They had no women’s ministry. I felt called to meet a need, and looked to the church for guidance.

The elders, staff, and pastor would say that they believe the Spirit speaks to and through all believers. In practice, I think their actions say otherwise. It became clearer over the 3 years that I was there that the church is run by a board of men called the “Network Leadership Team,” who are not members of the church and who determine a lot, from the topics that small groups discuss (the same ones every two or three years), to what programs the church is allowed to have (no women’s or men’s ministry), to what non-profits the church is allowed to partner with locally (none). The elders of Vista are selected by this board too. These are the people who have decided that the church will not have a women’s ministry.

I believe that the Spirit works uniquely in each member of the Body of Christ and in each local congregation, and from 3 years being there, I don’t think this church recognizes and allows for that. It hurts me to know that there were and maybe still are people (especially women) there who have felt needs that the church refuses to meet. For my part, it hurt very much to leave because all my friends were there. I don’t believe any of the leadership is outright malicious. But, dear church seeker, if you visit and feel like things are a bit “off” or “weird,” perhaps listen to your gut.

I also feel honor-bound to make it known to you that 5 of the written 5-star reviews as of the time of my posting are from members of the plant team.

I COULD NO LONGER TOLERATE THE SPIRITUAL ABUSE OCCURRING 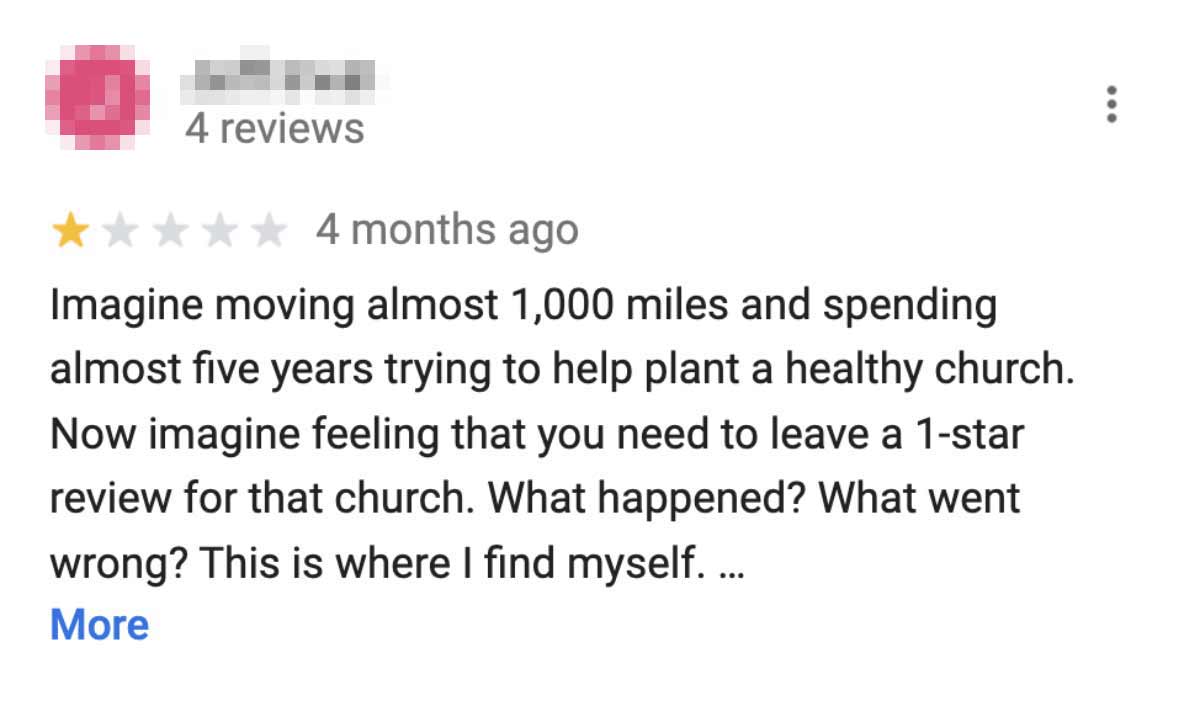 Imagine moving almost 1,000 miles and spending almost five years trying to help plant a healthy church. Now imagine feeling that you need to leave a 1-star review for that church. What happened? What went wrong? This is where I find myself.

My wife, two kids, and myself were part of the team of 47 that planted this church in 2016. I volunteered more hours and gave more money than I care to count, trying to build it up. I led a small group for over two years. I deeply regret all of that.

Vista Church is part of “The Network” of churches started by Steve Morgan. You can learn more about it by Googling “Leaving the Network”. I also write about it on my own blog, which you can find by Googling “not overcome”.

In the end, I could no longer tolerate the spiritual abuse occurring. The cognitive dissonance between the ways of Jesus and the ways of this church became too great to ignore. Over two dozen people have told me their stories of being harmed by Vista Church. I wrote a public letter to the church almost two months ago and have heard nothing in return from the leaders.

There is too much else to say – I strongly recommend visiting the sites listed above to understand more about Vista Church and its Network.

THE LEADERSHIP AT VISTA IS DOMINEERING, MANIPULATIVE, AND CONTROLLING 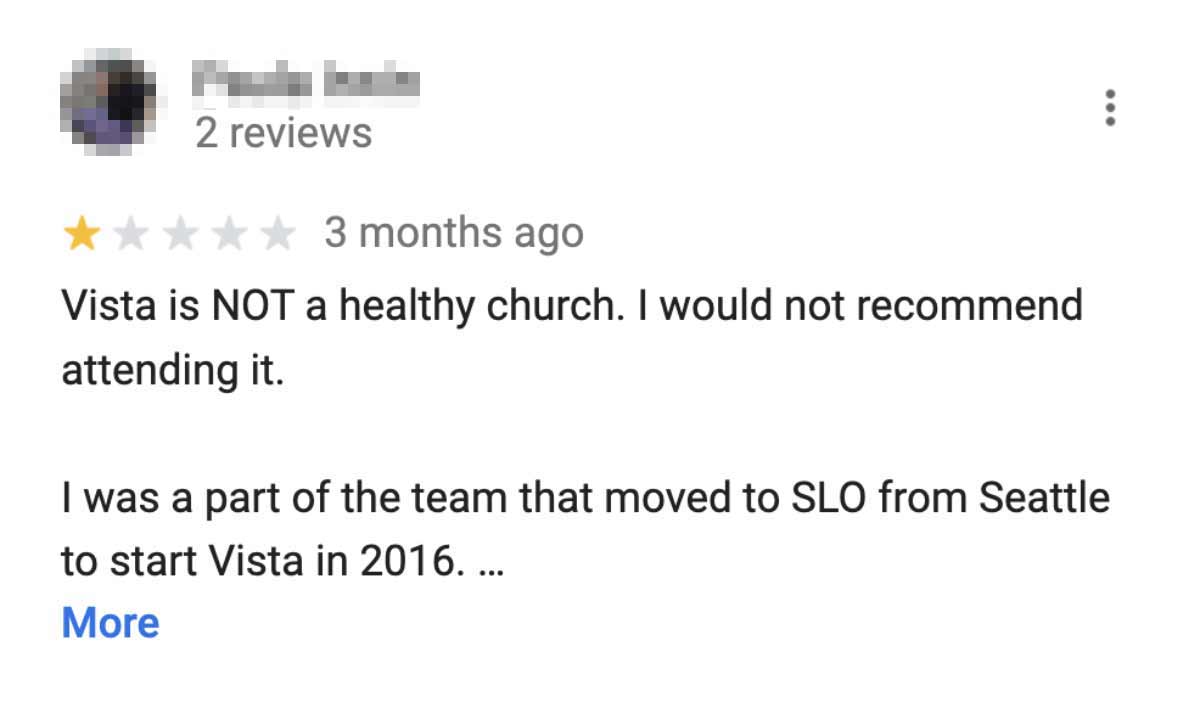 Vista is NOT a healthy church. I would not recommend attending it.

I was a part of the team that moved to SLO from Seattle to start Vista in 2016. I left in April 2021 after having served in and loved this church and its people for nearly 5 years. My husband was a small group leader in the church. In his time as a small group leader it became apparent that the pastor was domineering, manipulative, and gossiped about people in the church. It was incredibly hard to leave because all our friends were there. A number of these friends no longer speak to us because we left. But we had come to realize that what we were building was by no means a healthy church. Rather it was an extremely unhealthy one where conformity to the system and loyalty to the leadership was valued above loyalty to Jesus. We got to a point where we could no longer, in good conscience, allow our presence to imply approval of something so toxic.

The leadership at Vista is domineering, manipulative, and controlling. There are many people who have been harmed by Vista and the no-name network it is a part of. Google “Leaving the Network” and you will find many stories of deep spiritual harm done, including two stories specifically about Vista (one of them is my husband’s story). After my husband went public with his story, many people reached out to us with stories of the spiritual and emotional harm done to them at Vista. It was (and still is) absolutely heartbreaking.

Please save yourself the heartache of going to this church.

For the record, five of the written 5 star reviews were written by people who moved to SLO with me to plant the church, including one elder.